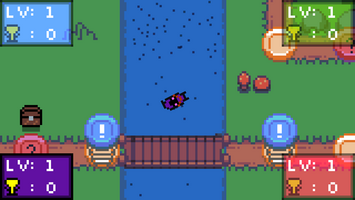 Turn-Based Champion has officially been released! Inform your friends that you have a new game you can beat them at. Tell your family the time has finally come for the bonds of love to be torn asunder. Stomp on the confidence of your peers and claim the title of best Turn-Based gamer out there.

Play against your friends and foes in this rpg-party game hybrid. Compete in both minigames and in the big race to take down as many bosses as possible. Grind in battle, stock up on items, and fight for the title of Champ!

Turn-Based Champion has been officially released on Itch.io, and will be out on Steam on June 5th.